Project Spotlight: A Beacon of Light in British Columbia

The city of Richmond, British Columbia is a vibrant, ethnically diverse community located just across the river from the Vancouver Airport and the city of Vancouver. In order to better serve the city’s roughly 200,000 people, its leaders have been working to enhance its infrastructure, including creating a new $20 million-dollar fire hall and ambulance station, the first combination of fire and ambulance service in British Columbia.

The new, nearly 2,500 square meter Cambie Fire Hall and Richmond North Ambulance Station was designed by Assembly Architecture and S2 Architecture and replaces and outdated fire hall while also allowing for additional combining of spaces to facilitate vehicle maintenance and a Department Operations Center when needed. The facility also incorporates other support spaces including sleeping dorms, a training classroom, administrative spaces, an exercise space, kitchens and outdoor patios. The facility is also built in compliance with BCBC 2012, ensuring that the building remains operational following a seismic event. 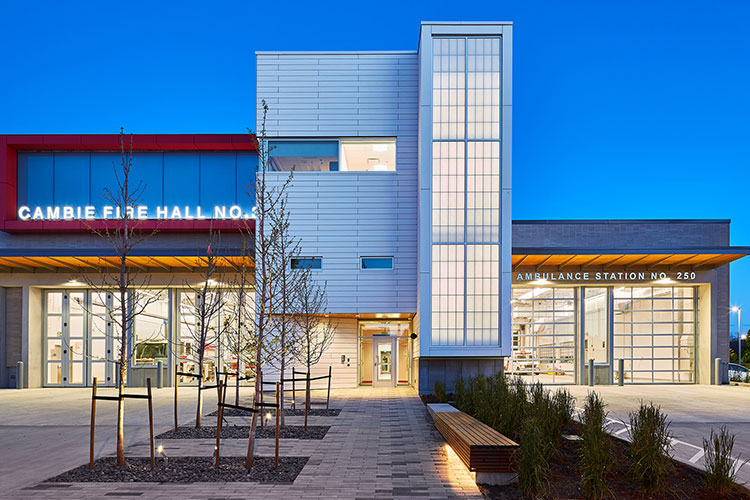 In terms of its exterior design, the station is a nod to the site’s residential neighborhood. “From this notion,” describes Robert Lange, Principal-in-Charge at S2 architecture, “we looked at the building as an anchor to the local area and residences, as well as a landmark for the larger region.” To its benefit, the City of Richmond is also a strong proponent of buildings that support a high level of expression, and for signature buildings to create an attractive and sustainable urban environment.

The design itself features a dual folding roofline that is meant to reflect the collaboration between the fire and ambulance teams, as well as bright red cladding on the upper level that references an old-school fire hall. “By listening carefully throughout the design process, the design team were able to create a design that immediately resonated with RFR and their vision for Hall No. 3,” explained Lange.

A large Guardian 275® translucent wall panel system also adds to the design flair of the building, highlighting the north stair tower and acting like a beacon for the neighborhood. The translucent fiberglass panels allow for soft interior light to emanate from the stairwell and produce a lantern effect. The street-side design is also enhanced by a beautifully landscaped entryway and bay doors that allow for speedy response times. “This $20.7 million investment supports the City’s commitment to public safety and to providing quality first response services for Richmond’s growing community needs” adds Jas Dharampal, project manager at the City of Richmond. “The Leadership in Energy and Environmental Design (LEED) Gold certified facility demonstrates our leadership and commitment to environmental design and sustainability.”

While it’s clear that the project was a success for the city, and for the fire and ambulance services who share the space, the facility has also garnered additional acclaim by receiving a notable mention in the Mixed-Use Facilities category in the 2019 annual Firehouse Magazine Station Awards.