While most of the country spends their energy on football or baseball, the upper Midwest is full of hockey-lovers. From youth leagues through high school and beyond, hockey plays an important role in schools, for parents and athletes, and for the larger community of fans. 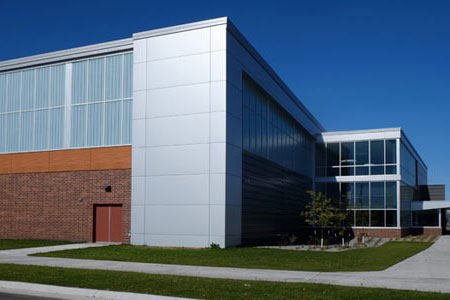 Since Fargo, North Dakota is cold and icy for a good chunk of the year, it's probably no surprise that hockey is king, and because of this, opening soon in the ever-growing West Fargo area is the roughly 70,000 square foot West Fargo Public Schools Hockey Arena. Designed by JLG Architects, it boasts a large main ice surface with room for up to 1,200 spectators, space for locker rooms and additional use spaces, plus a second competition-sized ice sheet with its own seating. Major supplied Guardian 275® translucent wall systems for the project, with a Verti-Lite™ grid pattern that mimics the look of channel glass. Guardian 275® is a great choice for adding diffuse natural light to a space while still achieving excellent thermal performance. And while they're great for harsh winter environments, they also excel at helping to keep colder temps inside ice arenas during the summer heat.