Major is proud to be a part of the recently constructed Hazel Wolf Elementary School in Seattle, Washington. Named for a 20th-century green activist and Seattle resident, it’s the city’s first environmentally focused public school. 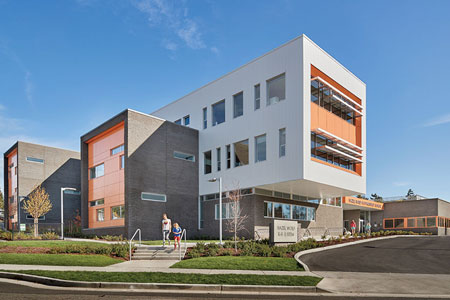 NAC Architecture’s Seattle office designed the new $39 million, 680-student facility, that's situated a few miles outside of downtown Seattle, one of the goals of the design was to blur the lines between indoor and outdoor spaces, and to turn the facility and its grounds into a unique learning lab. According to an article on the facility in Architectural Record, the school’s founding principal, Debbie Nelsen, recalls asking for “a feeling, throughout, of being outdoors in nature, with plenty of sensory interest and many different types of experiences.”

Connections to nature can be found throughout the building, with and emphasis on large windows and skylights, and a living wall. The article quotes Joe Bailey-Fogarty, who coordinates the E-STEM (environmental science-technology-engineering-and-math) program as stating “a lot of spontaneous learning happens here pretty seamlessly. We just step outside to demonstrate. Or in urban ecology class, we send everyone out to look for roots, shoots, spiders, and worms. The students live the environment they’re studying—it’s all integral—and their questions become part of the process.”

Major Industries provided numerous Guardian 275® single slope skylights for the project. They're a terrific daylighting tool as they are lightweight, easy to install, and provide soft, glare-free natural light for interior spaces.

With a focus on indoor and outdoor learning, and a site that is tightly incorporated into the community while still holding onto its natural surroundings, the Hazel Wolf School is sure to be a success. And we're honored to be a part of it!