When city planners and engineers began drawing up designs for a new harbor that could relieve the pressure on the Port of Helsinki, the need for easy access via roads and rails was a critical requirement. The new USD $757 million Vuosaari Harbor, located about 15 km northeast of central Helsinki, was built on 150 hectares (370 acres), which includes 90 hectares that had to be filled in.

The new harbor, completed in 2009, can handle more than 12 million tons of unitized cargo (e.g., containers, trucks, trailers, etc.) annually. A new four-lane highway and new rail lines were built to help move people and cargo in and out of the new port. 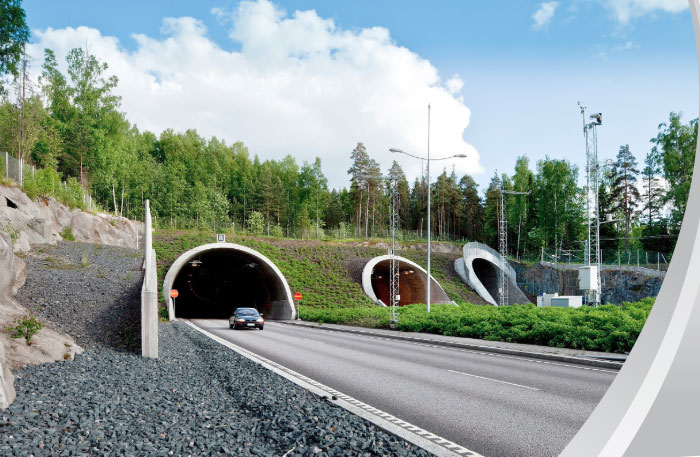 The new highway passes through two new road tunnels that were built near the outskirts of the new harbor to enable vehicles to travel unimpeded under 1.6 kilometers of solid rock. Planners chose to tunnel under a wildlife preservation area known as Natura 2000, which was deemed be the least intrusive travel option. The drill-and-blast tunneling method used to create the Porvarinlahti highway tunnels—named after a nearby bay—resulted in 1.9 million cubic meters of rock waste, which was used as fill in the harbor, as well as in noise barriers and landscaping.

The exposed rock interiors of the road and rail tunnels were reinforced with deep anchor bolts and coated with a base layer of standard shotcrete to a thickness of 60-80 mm. On top of this base layer, a 40-60 mm layer of shotcrete mixed with Xypex Admix C-1000 NF crystalline waterproofing was applied to provide a permanent seal against moisture intrusion. Finally, a 25 mm layer of standard shotcrete was applied to the innermost surface.

More than 28,000 kg (61,700 lb) of Xypex Admix was needed to treat the waterproofing shotcrete layer. The Xypex Admix was added to the concrete at the ready-mix plant using water soluble bags for accuracy, convenience, and the improved safety of the workers.

The tunnel designers considered other, more conventional, waterproofing approaches such as heavy membranes, but the time and cost to apply these mechanical solutions caused them to look for something more innovative. Membranes installed over exposed rock would always be at risk for future damage and leakage.

“The application of shotcrete treated with Xypex Admix in the Vuosaari highway tunnels is believed to be the first time crystalline waterproofing has been used for this purpose in Finland,” notes Ronald Sulin, Xypex sales manager for Finland. “The two tubes of the road tunnel actually dip below sea level, so the need for protection from the ingress of saltwater is a real concern. Within a few months, any seepage that was seen initially dried up as the Xypex did its job, filling in micro cracks and voids with non-soluble crystals. It’ll continue working for the life of the tunnels.”

Now, more than 10 years after the opening of the Vuosaari Harbor and the road and rail tunnels that help keep it humming, the Xypex treated shotcrete continues to prove its effectiveness.

“The use of Xypex crystalline waterproofing admix in this shotcrete application has truly been a revelation in this market,” Sulin observes. “Experts have had a long time to study the product in action and I think it is safe to say we have impressed the skeptics. Not only in Europe, but around the world, designers, engineers and contractors are increasingly specifying Xpex Admix for spray-applied concrete. It saves time, saves money, ensures two-way moisture protection, and lasts the life of the structure. It makes sense.”