A Cincinnati landmark with a rich and unique history recently received a total facelift, restoring the facility to the grandeur it displayed when it opened 140 years ago.

Workers tackled a 16-month, $143-million project at Cincinnati Music Hall, which is the home of the Cincinnati Symphony Orchestra and several other cultural organizations, reduced seating capacity at Springer Auditorium from 3,417 to 2,263-2,524, depending on the configuration. The project included updates to the roof, exterior, Edyth B. Lindner Grand Foyer, Corbett Tower, Library and Ballroom. In all, the project added 31,549 square feet in the same footprint. 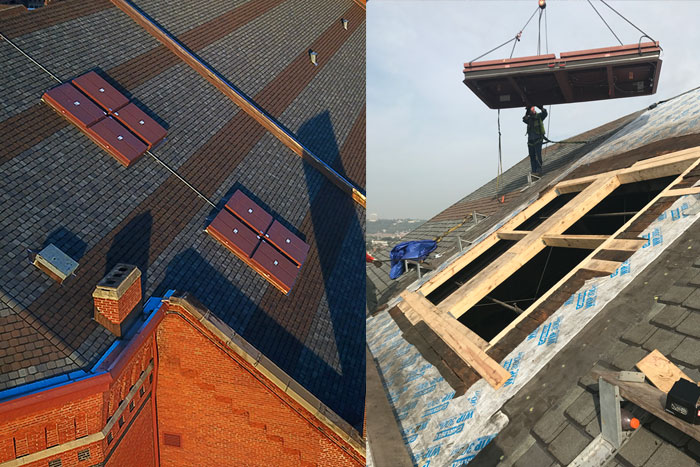 “We’ve been in business since 1880 and take pride in our work on many of the iconic buildings in Cincinnati,’’ said Andrew Imbus, Project Manager at Imbus Roofing of Wilder, Kentucky. “This is a project that we are going to be proud of for a very long time.”

Music Hall, which was recognized in January 1975 as a National Historic Landmark by the U.S. Department of the Interior, also serves as the home of the Cincinnati Opera, Cincinnati Pops Orchestra and May Festival Chorus. One of the most challenging assignments in the major remodeling effort was the roof. Imbus and his team had installed the previous roof in 1988.

“It was worn, but still water tight,’’ Imbus said. “Some shingles were starting to blow off.” Imbus’ first charge was to find replacement shingles that mirrored those of the past roof to preserve the historical appearance of the building. The roof also required new double leaf smoke hatches, manufactured by The BILCO Company of New Haven, Connecticut. Imbus’ team installed seven DSH Automatic Smoke Vents. The vents, which measure 66 inches by 144 inches, are among the largest smoke hatches on the commercial market.

The smoke vents include a Thermolatch® II positive release mechanism that ensures reliable vent operation when a fire occurs. The vents automatically release upon the melting of a UL-listed 165F fusible link, and a curb-mounted fusible link allows the latch to be easily re-set from the roof level. The vents are fully insulated and gasketed for weather tightness. The vents are hard-wired to the fire suppression system and open electronically if the sprinkler system activates.

Corken Steel, the local distributor of the smoke vents, and BILCO rep Joe DeFrain of Welling, Inc., worked with Imbus in procuring the roof hatches. The vents were installed above the main hall, Springer Auditorium, and are designed to open in an emergency to allow smoke and hot gases to escape. This allows better visibility and breathing conditions for audience members and performers to evacuate safely and aide firefighters in their containment efforts.

“This was an important project for Cincinnati,’’ said Joe DeFrain, a BILCO representative with Welling, Inc. “It’s part of a revitalization of the entire community. Everyone in Cincinnati knows the Music Hall. We’re a third generation, family-owned company from Cincinnati, and we’re proud to have been a part of it.”