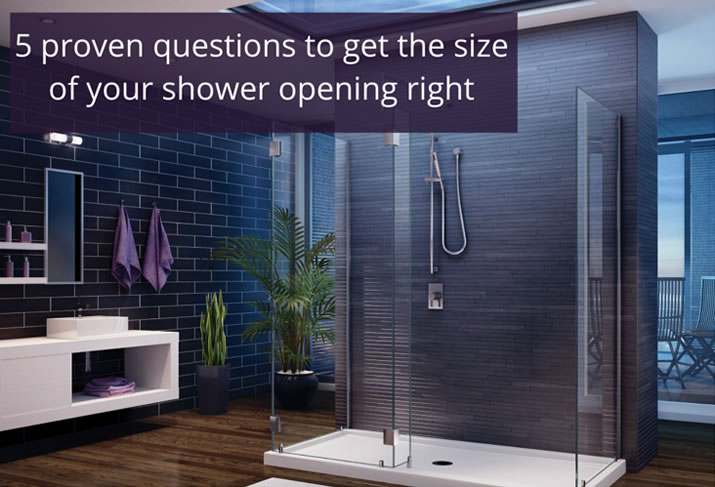 If I’ve been asked this question once I’ve been asked it a thousand times, “ Mike – how big should I make the opening for my new shower?” OK – I’ll give you my standard answer. It depends. Boy doesn’t that sound like a cop-out!

In all seriousness designing a shower opening is a bit like being a politician -you’re trading off competing interests. On one hand you want to have the biggest opening so it’s simple to get into and out of the shower whether you’re walking in, shuffling in or rolling in with a wheelchair.  On the other hand you want the opening as small as possible so you don’t get water pooling on the bathroom floor which could lead to leakage in the floor below. Given these competing benefits of a smaller vs. larger shower opening where does that leave you? How can you find just the right sized shower opening for you and your family? Explore the answers to the following 5 questions and you’ll be assured to get the size and design of your shower opening correct.

Question #1 – Who is going to use this shower now and possibly in the future?

Start out by identifying who will use the shower today…and possibly in the future. Is your son whose claim to fame is being a “lean and mean” 350 lb. defensive tackle of the football team going to be the main user or is your daughter who is a pencil-thin gymnast using this space? Obviously if you’re designing the shower opening for your son it will need to be significantly wider. What can/should you do if they are both going to share the shower? I would recommend to split the difference in the opening size – which may mean your son will step into the shower sideways vs. your daughter going in straight on.

While considering the here and now usage of this shower is critical – you will not want to lose sight of who may be using it down the road. Is it possible your Mom or Dad may come to live with you if their health starts to fail? If so – the new shower opening may need some design tweaks (possibly a ramped entry, a lower curb or one level base design) which will prevent you from ripping out the brand new shower you’re putting in right now (see question 3 to get specific ideas).

Question #2 – What method are you going to use to get into the shower? Do you need to walk straight in or are you OK stepping in sideways?

This may seem like a funny question but it is important and practical. If you’re walking straight into the shower you’ll need significantly more space than if you’re stepping in sideways. When determining the opening for a straight in entry – which is preferred by most- I recommend measuring across the shoulders of the people using this shower. You’ll want to use the largest shoulder to shoulder measurement of all the people using the space to drive the size of the opening. On the other hand if you’re OK with a sideways entry you can measure the “depth” of the person.

If you have a small shower the sideways entry may be required but in general the most common straight in entry for people walking in is 24” wide.If you’re designing the opening for a wheelchair or walker for your home know you do not need to follow ADA (Americans with Disabilities Act) guidelines for public spaces which require a 36” wide opening. With that being said you do want to make the opening comfortable to get into. In this case I would recommend you get a measurement of your family member in their wheelchair and allow side to side clearance room for their hands.

Question #3 – Are you stepping over, ramping up or rolling in (designing for either a curb or curbless shower)?

Not all people using a shower are created equal – I’m sure you’re saying tell me something I don’t know. Your family (if it’s like mine) – is definitely made up of some characters in both their personalities and physical capabilities. A “simple” 4” high shower curb which is a breeze to step over for your football playing son and gymnast daughter, could be a huge mountain to climb for your elderly Mom. So for the kids the 4” high step over curb (which does a great job keeping the water in) is no problem, could be the wrong shower entry design choice for Mom if she is mobility challenged. Here are 4 competing shower curb and entry options for you to consider depending on who(m) will be using the space:

Question #4 – Will you use a doorless walk in shower or a framed or frameless glass shower door?

If you are looking at a shower door you’ll want to think beyond the “rough opening” (the opening before you install the door) and focus on the “finished opening” (or the space which will be left minus any framework around the door). A frameless door will give you a larger finished opening than a door with a framed system around it. The frameless system looks more luxurious, but comes with a higher price tag.

Question #5 – Will you have more than one opening?

This one sounds like a trick question. How can you have more than one opening in a shower? The answer is – when the glass (or framed enclosure) has either a curved or L shaped design. Many walk in showers are not straight walls but have shape to them so the water will be directed back into the “wet area” (shower head area) of the shower. What this means is you actually have two openings. One is the “entry opening” where you step in and the other is the “interior opening” as you move towards what I like to call “the business side” of the shower.

Conclusion – how to size and design a shower opening

OK – how have I done? Do you feel you know the right questions to ask how to figure out the size and design of your shower opening (or openings)? If you’re looking for more information or an estimate on remodeling a shower or nationwide material supply for the shower wall panels, shower bases or wet room systems call The Bath Doctor in Cleveland (216-531-6085), Columbus (614-252-7294) or for nationwide supply Innovate Building Solutions (877-668-5888).