Revolving doors have been around for well over 100 years since their invention by Theophilus Van Kannel in 1888. As the story goes, Van Kannel, working in a lobby during a cold winter in Philadelphia, complained about the unpleasant effects of the swing door at the main entrance: “Every person passing through [the exterior door] first brings a chilling gust of wind with its snow or rain, and the noise of the street; then comes the unwelcome bang!”

Van Kannel decided to do something about it, he started a business, and the rest is history. The new type of doors stopped air infiltration and were quiet during use. But, how much can you really improve on what is a relatively simple concept? In fact, modern technology and engineering have completely transformed Van Kannel’s invention in terms of safety, ease of use, and even security. Let’s take a closer look. 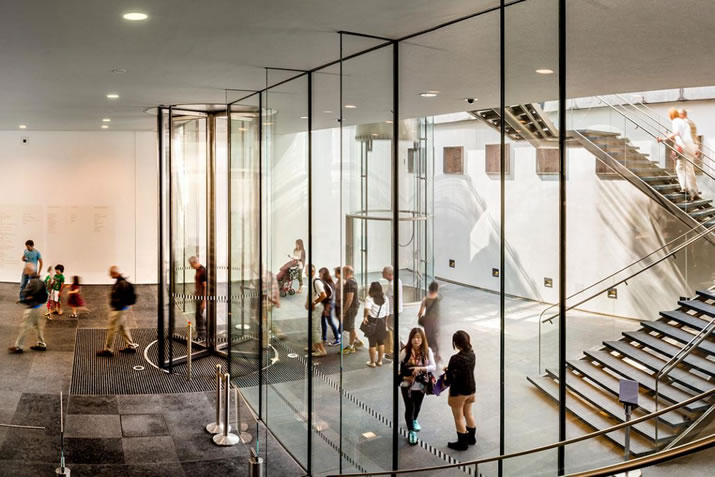 Modern technology and engineering have transformed the revolving door in terms of safety, ease of use, and security

If you’ve seen the movie, “Elf”, you might remember the main character playfully running around and around in a revolving door at top speed laughing gleefully. While a great comedic effect and a chance to discover your inner child, the possibility of finding a door that would allow you to try this out for yourself is becoming quite rare. The reason, of course, is safety. Today, manual revolving doors typically include a speed control device in their canopy that prevents the door wings from being rotated too quickly. There are standards for manual revolving doors developed by the American National Standards Institute (ANSI), which guides building codes for new construction. The top speed allowed for a manual revolving door is 12 rotations per minute (RPM). If you rush into a modern revolving door and try to run, the door pushes back. Of course, this takes away all the “fun”, but it does create a predictable, safer door for the public. In exchange for eliminating the fun factor, however, we can talk about a lot of new and modern features.

A recent technological advancement that has happened in the last few years is exciting because it has become a gateway for even more advancements, which we’ll describe later on. That recent advancement is a combination called “power assist” and “positioning” (the latter is also known in the industry as “quarter pointing”). All it takes is a little electricity…

Power assist is a feature that helps a pedestrian push the door. It used to be you had to keep pushing and pushing a door wing to get to the other side. But with power assist, a low energy motor kicks in and starts doing the work for you, relieving you of up to half the effort you had to use before. This is great for everyone, but especially for women, children and the elderly. You just have to get the door wing started and it keeps rotating on its own at a moderate, comfortable speed.

Another benefit of power assist is you can have much bigger doors than before! Physics had always limited the diameter of manual revolving doors because the larger the door gets, the bigger and heavier the door wings become. In fact, for every 6 inch increase in door diameter, a single door wing’s weight increases by 25 lbs. Thus, if you compare a 6’ door with an 8’ door the difference in door wing weight is 100 lbs.!  Now, with power assist, it is possible to comfortably push and walk through a door that is up to 10’ in diameter and 10’ feet tall!

For pedestrians, such a larger door is a much easier and more spacious experience that can accommodate even a rolling bag quite well. No more small, tight compartments. Think big and open, and a lot of light coming through making for a nice first impression in addition to the ease of use.

Positioning or “quarter pointing” is a feature where, after someone has used the door, the door wings will stop in the “set” position, right up against the end posts of the throat opening. Every time. It’s like the door always “strikes a pose” and gives you it’s best side when it stops. The next user can just step up to the door and the door wing is in the right spot, ready to be pushed. So, an obvious benefit is that the door is more intuitive to use.

A not-so-obvious benefit of positioning is the fact that when the door is at rest, all of its door wings are in contact with either an end post or the drum. This maximizes the seal effect of the door and prevents air infiltration as much as possible, thus saving a lot of energy when compared to swinging or sliding doors.

Both power assist and positioning are a gateway for several security features. How is that nice little trick accomplished?

If you have a manual revolving door that has modern power assist and positioning features, you have electric power coming to the door, and this means you can add more electric features. If you add electronic shaft locking you can stop door rotation at the push of a button. Now, add presence detection sensors in the ceiling and an access control system, and voila! You now have a manual revolving door that can serve the public during the day and be locked at night. After hours, a user can present their credentials to the access control system, which in turn can unlock the shaft locking and allow the user to push and enter the building. Why include the presence sensors inside the door? To ensure no one gets trapped in the door when it positions and relocks.

Before these security features were introduced, someone had to walk over to the door and throw a vertical deadbolt down into the floor or ceiling to lock it. With electronic shaft locking, you can lock the door from a distance by pushing a button, or let the access control system do it automatically.

Also, with shaft locking, you can ask for a door with a “panic lock” capability: if, say, there was a security threat at the door during business hours, you can push a button behind the reception desk to stop the door dead in its tracks and prevent intrusion.

Keep in mind that you now have a very sophisticated manual revolving door that can be used in so many ways in various public locations. However, it is not the same as a security revolving door, which can stop tailgating and piggybacking and usually requires trained traffic, such as employees coming into a place of work vs. the general public.

As you can see, today’s manual revolving doors have come a long way since the small, cramped, heavy wooden models invented in the 19th century. Their original benefits of preventing air infiltration and noise certainly remain, and with today’s modern updates in ease of use, safety, sustainability and security, they are increasingly likely to become the door of choice in the future.