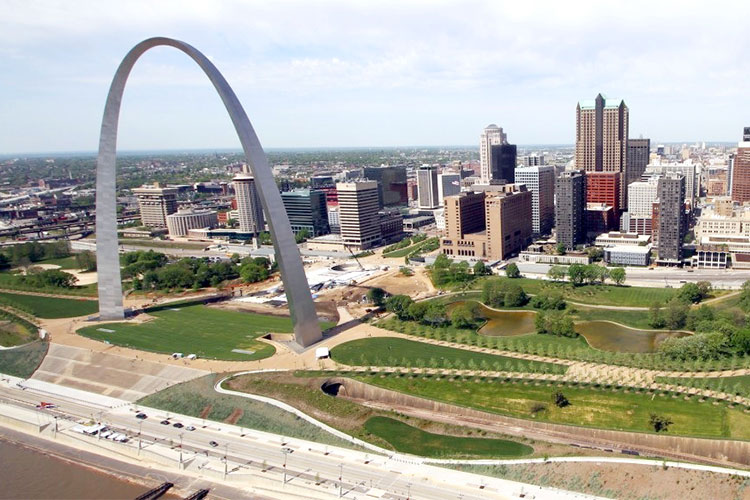 Soaring 630 feet above the mighty Mississippi River and its St Louis, Missouri, home, the gleaming stainless steel Gateway Arch is the centerpiece of the Gateway Arch National Park and a popular attraction that draws more than three million visitors each year.

Unfortunately, while the weighted catenary arch itself realized the dream of its designer, Eero Saarinen, when it was completed in 1965, the rest of the 91-acre site fell victim to cost cutting and failed to link the park to the rest of the city as had originally been envisioned.

In 2009, a plan was developed to dramatically expand and redesign the landscaping and facilities around the base of the Gateway Arch (fig. 1) to integrate it more fully with downtown St. Louis and provide the visitor experience befitting one of the world’s greatest monuments. The largest public-private partnership (P3) investment ever in a national park—known as the Gateway Arch Park Foundation—was formed to provide $380 million in public and private funding for the renovation and expansion effort. 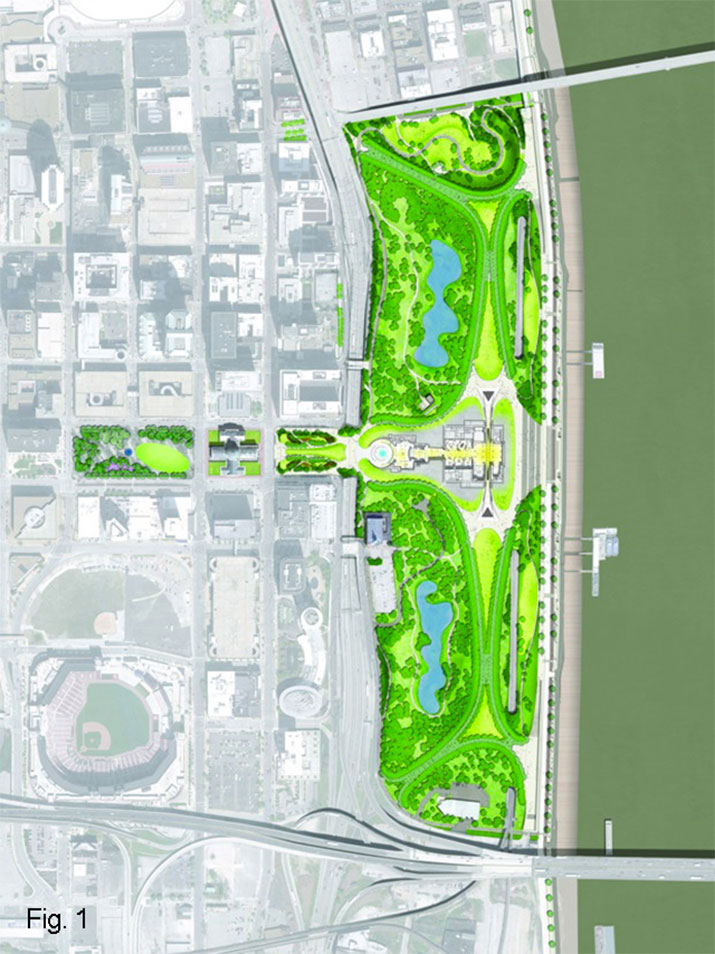 Fig. 1 - A new vision for the Gateway Arch National Park ties the park more directly to downtown St. Louis by means of a 300-foot wide extension over a six-lane highway that previously separated the park from the city. The $380 million Gateway Arch renovation and expansion took four years to complete. (courtesy Michael Van Valkenburgh Associates)

The multi-phase project, which was completed in July 2018, features a 46,000 square foot addition to the preexisting visitor center and museum, the complete renovation of the pre-existing 106,000 square foot Museum of Westward Expansion, the construction of a 300-foot wide park extension (fig. 2) over an adjacent highway, flood abatement measures, revised landscaping for the 91-acre park, and the renovation of two major plazas that lead west from the park into downtown St. Louis. 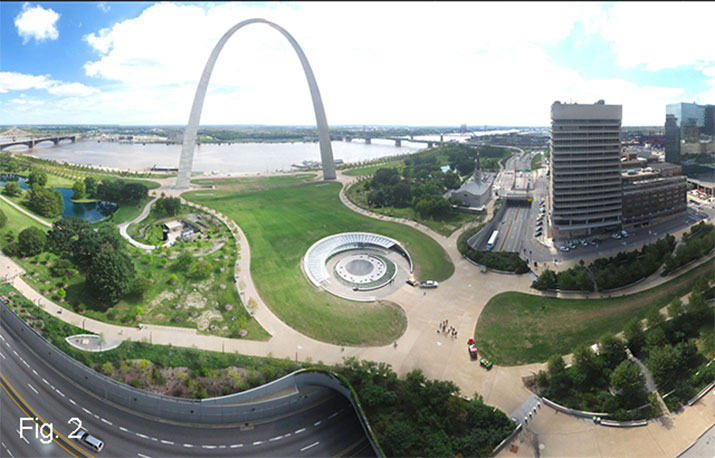 Waterproofing of all renovated spaces and new facilities was a critical concern for McCarthy. The firm contracted with the St. Louis branch of Western Specialty Contractors (WSC) to waterproof the roofs, walls and floors of new and preexisting structures throughout the four-year project. WCS is a third-generation family run business with offices nationwide.

The new entrance to the park features curving pathways around a pond that allow visitors to gradually descend below grade level into a luminous space. Previously, visitors entered at the base of either arch legs and could easily skip the museum and gift shop on their way out. Now, visitors are treated to an immersive experience even before they reach the trams to carry them to the top of the arch.

Built below the publicly accessible level of the new visitor center is a network of mechanical tunnels, measuring 12 feet high, 14 feet wide, and running a total of 550 feet (fig. 3 & 4). The tunnels carry various utilities, including steam and electrical lines, and provide pathways for employees to traverse the facility without entering public spaces. The tunnels also provide the base pits for several elevators, a stairwell, and two escalators. 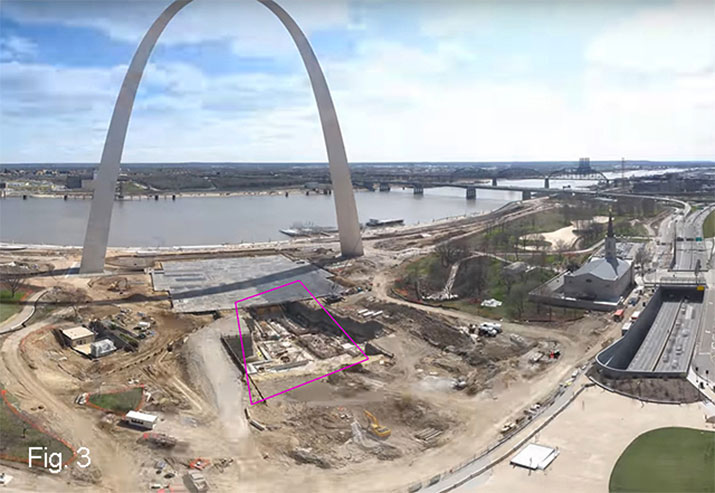 Fig. 3 - Under construction – a 46,000 square-foot expansion to the Gateway Arch Park includes a new visitors center and museum expansion. At this point in the construction, utility tunnels (indicated by shaded area above) were built below publicly accessible areas to provide a pathway for utility lines and to allow workers to move about without entering public areas. The interior of these cast-in-place, below grade concrete tunnels were later treated with Xypex Crystalline Waterproofing Technology. (Photo courtesy of EarthCam) 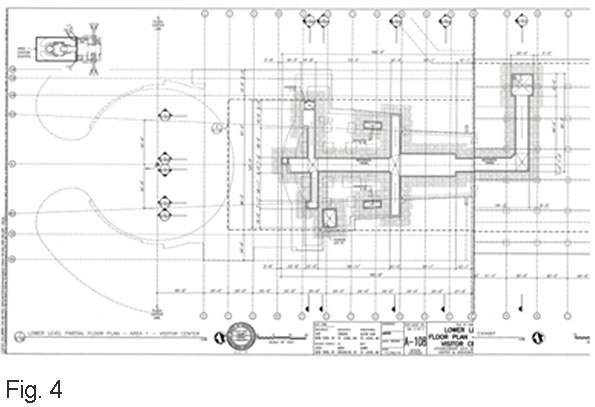 Western Specialty Contractors’ St. Louis branch assisted McCarthy in the pre-construction bid preparation process. The architect indicated that a crystalline waterproofing should be applied to the interior walls and floors of the mechanical tunnels. The outer walls, but not below the floor, would also be waterproofed with an asphalt membrane.

In its bid for McCarthy, WSC specified Xypex Concentrate and Modified, both based on Xypex Crystalline Waterproofing Technology, to waterproof the interior surfaces of the tunnels. WCS, a member of Local No. 2 of the United Union of Roofers, Waterproofers and Allied Workers, has had extensive and successful experience in the use of Xypex crystalline waterproofing products in projects nationwide.

“The specification we received noted that a crystalline waterproofing product should be used on the interior of the tunnels and it named three products; however, only Xypex was applicable to our project,” explains Thom Belgeri, senior department manager, Western Specialty Contractors, St. Louis branch. “We were very familiar with Xypex and knew it would work well for this application. It was really a no brainer.”

WCS worked in small crews to apply the Xypex waterproofing products (fig. 5 & 6) to nearly 20,000 square feet of interior tunnel surfaces. “Other contractors needed access to the tunnels so we had to kind of work around some of the other trades,” Belgeri says. “We would apply the Xypex for three or four days and then take a short break while other workers finished their jobs. Working in that way, it took about a month to do the whole thing.” 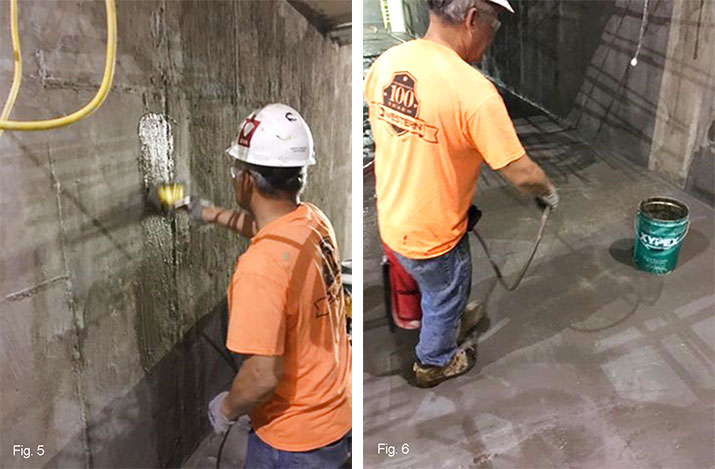 Both Xypex Concentrate and Modified are unique crystalline treatments for waterproofing and repair of concrete. Xypex Concentrate consists of Portland cement, finely graded sand and active proprietary chemicals. It is applied as a cementitious slurry to the pre-saturated surface of any above or below grade concrete.

The active chemicals diffuse into the substrate and react with moisture and the constituents of hardened concrete to cause a catalytic reaction. This reaction generates a non-soluble crystalline formation throughout the pores and capillary tracts of the concrete, preventing the penetration of water and other liquids from any direction, even under high hydrostatic pressure.

WCS crews mixed Xypex Concentrate and Modified with a drill mixer in four-gallon batches and scrubbed it onto the floors and walls of the tunnels with stiff brushes. One worker would power wash the next area of the tunnel to be waterproofed, while three to four other workers applied the Xypex crystalline waterproofing. Along the joints where the tunnel walls met the floor, the concrete crew formed a one inch by one inch channel (i.e., block-out) in the newly poured concrete to allow WCS to dry-pack Xypex Concentrate into those critical joints for extra protection. The dry Xypex mix was tamped into the joints with a wood block and hammer to provide extra protection at these vulnerable joints. A pneumatic packer may also be used for this purpose.

The combination of Xypex Concentrate and Modified was also used by Western Specialty Contractors to waterproof four 60-foot long by two-foot wide concrete trench drains at grade level, as well as hundreds of feet of arced knee wall used around the new, circular entrance that welcomes visitors to the expanded and renovated Gateway Arch National Park.

“Our branch specializes in new construction waterproofing and roofing,” Belgeri notes. “We have two other groups in St. Louis that specialize in concrete and masonry restoration. We all use Xypex concrete waterproofing products extensively. We used it a lot for applications just like the Gateway Arch project— tunnels and elevator, escalator and stairwell pits. Anywhere, usually below grade, that needs extra protection. General contractors are the toughest critics. The goal is no callback from the GC, and that’s what we get with Xypex.”