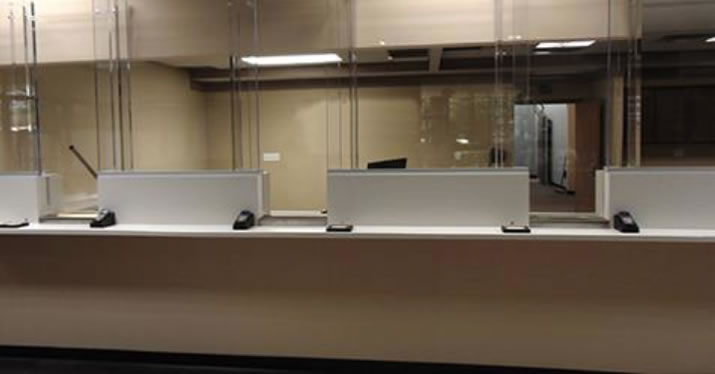 “Banks can be pretty ornate, so were used to having to adjust what we do to match a given location.” Total Security Solutions CEO Jim Richards explains, “That’s our speciality, that sort of customization. Even when we’re doing many locations for the same chain, in different parts of the country each office looks a little bit different.  It’s like housing, in that it has this regional component.  So we don’t try to come up with a single one-size solution we can just keep punching out.”

Total Security Solutions isn’t limited to just shuffling around pre-fabricated pieces.  They can customize down to the individual component level: curved ballistic transparency, special communication and ventilation solutions, all-glass and completely custom high-security doors, and so on.

In contrast to many security companies—especially local glazers—Total Security Solutions is sensitive to how important relationships are in banking.  Jim puts special emphasis on clear sight lines and communication in such settings.  Gina Mims, a facilities manager, recently coordinated with Total Security Solutions to secure several offices for the Health Plan of San Joaquin:  “I love the fact that … it doesn’t look like the old school [barrier] with that metal plate [and talk hole].  It all looks very nice.  Our buildings, both of them, are very modern, so I wanted to make sure that they stayed along those lines.”

ATMs pose obvious risks to customers, both in terms of their physical safety and fraud exposure.  They are also proving to be a significant and unpredictable liability to financial institutions.  For example, within the last several years European banks have been increasingly plagued by teams of thieves who attack ATMs in the night, flood the machines with a mixture of oxygen and acetylene (gases usually used to fuel welding torches), and then ignite the volatile mixture, blowing the machines open.  These attacks don’t just result in significant monetary losses (both in damage to the unit and building, as well as money stolen)—they’re also incredibly dangerous, as you can see here (the ATM is at the far right edge of the frame, in a mostly blue enclosure with a red top half):

This could easily result in injuries not just to the thieves, but also to passersby, staff, and even people in adjacent buildings.  Although there have been no reported ATM “gas bombings” in the United States as of yet, the US currently leads the world in losses resulting from insecure ATM locations.

According to Jim Richards, “There are a lot of different ways that ATMs are deployed, but we have yet to see one we couldn’t secure.”  In many cases Total Security Solutions favors a design similar to their bulletproof vestibule system used in schools, replacing the outer glass and doors of the ATM vestibule with bullet-resistant transparency and framing, and securing access to the ATM with a ballistic door outfitted with a card swipe-actuated computer-controlled electric strike. “Customers swipe their ATM card to gain access, and then the door latches behind them–just like any other security door. These are really easy retrofits for situations where the ATM is installed in the bank vestibule or outer lobby, but the same idea works with exterior-wall ATMs: You build a bulletproof glass curtain wall around an exterior wall-mounted ATM, with the same sort of card-swipe entry system. What’s key is that this solves both the skimmer/fraud/vandalism problem, as well as protecting customers.”

Most importantly, owing to their decades of experience, Total Security Solutions has optimized their prep, design, fabrication, and installation processes. “It can be two teller stations or 15; we’re able to move on the project as quickly as the operations or facilities manager are ready.”

Bullet resistant barrier system installations are designed to absolutely minimize any business interruptions.  Most installations can be completed overnight, with even the most challenging retrofits installed in under a weekend.

“I just returned from see[ing] the install and boy what nice work!” Holly Eades, vice-president of finance for Clark Energy wrote after having several payment offices secured by TSS.  “They were here when they said they were going to be, … showed up when they were supposed to, and everything was just as neat as a pin.  We were really, really tickled with their work.”