From the sturdy frames that hold up our homes to the smooth cell phones we hold in our hands, most important items in modern society are made, at least partially, from metal. It supports, strengthens, conducts electricity, and does so much more.

Despite being such an important facet of our daily lives, many people know remarkably little about metal. How is it made? What distinguishes one type of metal from another? What type of metal is best suited to which task?

The following guide should answer those questions and more about the metal that serves and supports their daily lives. 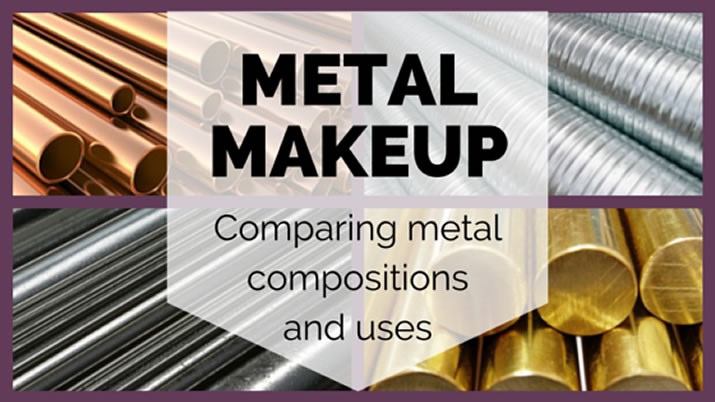 The origins of aluminum date back to the early nineteenth century. German chemist Friedrich Wöhler studied past experiments on what early scientists called aluminum, and later successfully produced the material in an isolated, pure form. Later chemists would expand, edit, and ultimately improve the way aluminum was made.

Aluminum is made chiefly from the ore bauxite, and its creation involves crushing, grinding, digesting in a machine, settling, and calcination.

Thanks to its strength and relatively light weight, aluminum is used in a great number of common fixtures, including foils, soda cans, utensils, airplanes, and more. It's also infinitely recyclable and produces a relatively small carbon footprint when made.

Brass is an alloy, which means it’s a combination of multiple metals. In this case, made from copper and zinc. The oldest reports of its use (as an alloy of copper and zinc) date back to the first millennium BC in the Mediterranean. Its production process has changed and been refined through the years, and is primarily made through melting, mixing, and rolling the two metals together.

From a practical perspective, brass is popular for being both durable and versatile. It can withstand extreme temperatures, does not corrode, and features solid strength. People also find it visually engaging, as it looks like a shinier iteration of gold.

For these reasons, brass is regularly used for locks, door knobs, door hinges, pipes, valves, and even sculptures and decorations. Brass boasts both flash and substance.

Though the metal may signify "third place" for some, in most cases, it's a first place choice.

Like its similarly colored counterpart brass, bronze is an alloy; this time, of copper and usually tin. It can also be made by combining the copper with aluminum, arsenic, silicon, phosphorus, and other metals.

Bronze has a deep and storied relationship with history; so much so, that it even has a prominent period of time named after it—the Bronze Age. Whenever a region (from Europe to East Asia) started smelting copper and tin to make bronze as a primary means of production, it entered its respective Bronze Age, periods characterized by discovery and invention.

Like brass, bronze has both pragmatic and stylish appeal. It has low metal-on-metal friction, which makes it a vital component in many metal-based structures. For this reason, it is commonly used for springs, bearings, clips, and connectors in many machines, including vehicles.

Its robust coloration makes it popular for sculpture and accents on modern furniture.

Steel, the venerable backbone of buildings and structures worldwide, is an alloy of iron and carbon with history dating back to 1800 BC. In early years, it was used primarily for weaponry and armor. Archeologists have found ancient forges and furnaces in most corners of the world, including the Mediterranean region, China, and India.

Thanks to modern innovation, steel making has evolved, though the basic process has generally stayed the same. Iron ore is melted to remove impurities, including excess carbon. Once the right amount of carbon is achieved, the mixture cools, and what's left is steel.

Steel is popular for its incredible strength and relatively low cost. Its sturdiness and reliability make it one of the most common and widely traded construction materials in the entire world. It's found in automobiles, ships, buildings, weapons, appliances, and even in wool format.

Though there are a great many types of steel, none is more widely known than stainless steel. A mainstay for modern appliances and stylish homes, this type of steel alloy contains at least 10.5% chromium by mass. Chromium is a scintillating, brilliant element that gives stainless steel its stunning appearance.

Chromium-steel alloys date back to the early nineteenth century, though the first composite similar modern stainless steel was created at the dawn of the twentieth century.

Stainless steel, when compared to other metals (including other types of steel) is very resistant to corrosion and staining. The sparkling shine it’s known for does not easily dull.

It's frequently used in the production of surgical instruments, cookware, storage tanks for corrosive materials, industrial equipment, and household furniture.