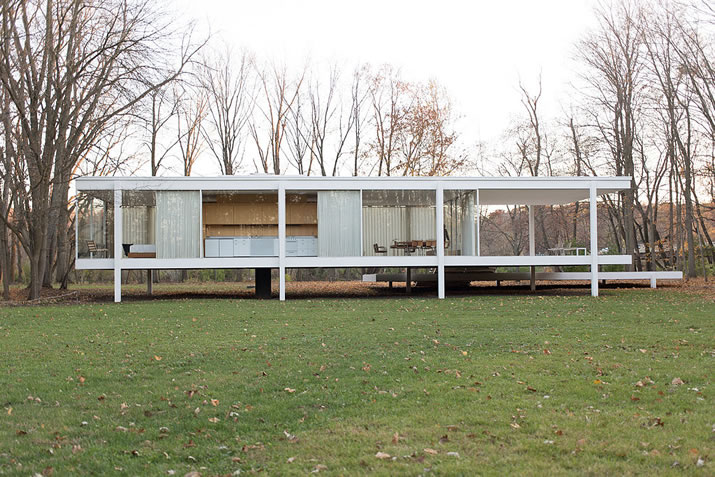 The 1950s marked the beginning of the Mid-Century Modernist movement in architecture with Ludwig Mies Van Der Rohe highlighted as a predominate leader. This time period in architecture is characterized by large windows, open floor plans, and a focus on bringing the outdoors in. Flat roofs and sliding glass doors also became more common in residential design.

Mies Van Der Rohe employed a “less is more” design mentality and widely used glass and steel in the construction of his buildings. Glass and steel construction made its debut in the early 1900s, but Mies Van Der Rohe introduced a clean, simple approach to incorporating large panes of glass into a building’s exterior. He has even been credited with designing the original steel and glass skyscrapers we know today. The proposed designs for two unbuilt skyscrapers in Berlin (one in 1919 and one in 1921) feature uninterrupted bands of glass between finished faces of concrete slabs, a technique that is still widely used.

Glass was an invaluable material in Mies Van Der Rohe’s design approach as it allowed for a continuous flow of space, from interior to exterior. One example of this is the German Pavilion or as it later became known, the Barcelona Pavilion, originally constructed for the 1929 Barcelona International Exhibition. It features large glass pane walls, both tinted and translucent, to define space and create flow while maintaining sight lines.  The pavilion was actually deconstructed in 1930 at the end of the exhibition and later rebuilt in its original location in 1986.

Mies Van Der Rohe’s Farnsworth House is another prime example of his strong incorporation of glass with its floor to ceiling glass walls. Completed in 1951 in Plano, Illinois, the Farnsworth House features a simple glass box design supported by a minimalistic steel structure.

While it’s a stretch to say a bulletproof barrier can compare to the aesthetic beauty of the Farnsworth House design, the principles of large glass panes, unobstructed sight lines and a minimalistic steel structure are all obtainable. Mies Van Der Rohe took materials already in use and re-evaluated their application. Total Security Solutions prides itself on customization and the ability to work with architectural designers to push the envelope and create truly beautiful, secure ballistic barriers.

As Jim Richards, CEO of Total Security Solutions says, “We know we’ve done a good job if people are like ‘Wow, this isn’t what I expected!’ People have a visual picture of what they’re expecting—something dark and ugly, like a county lockup—and what we provide is drastically different from that. We are always looking for that ‘Wow­-factor’ when we leave.”