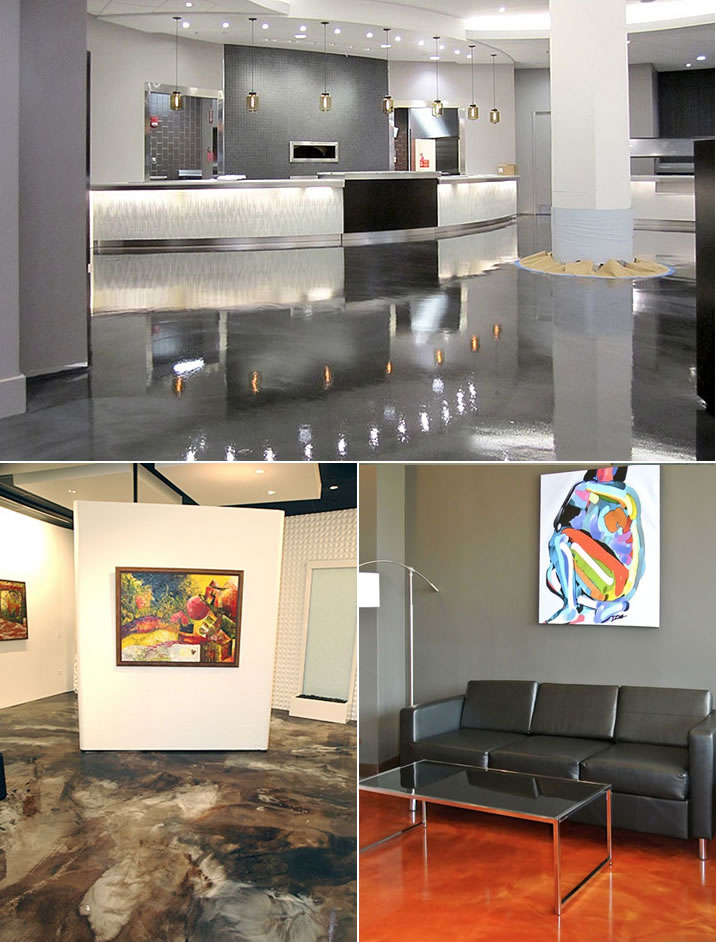 Lumiere - Reflector Designer Epoxy Coatings with miniscule metallic pigment particles suspended in translucent epoxies are giving contractors the uncanny ability to produce mirror-like surfaces without having to grind the first diamond to achieve that shine.

Offered in a dazzling array of colors, reflector designer epoxy coatings are being used to create gorgeous and highly durable designer floors largely in metropolitan areas throughout the world where superior surfaces are needed and a contemporary look is desired. These places run the gamut, from nightclubs, restaurants, car showrooms and offices to health care facilities, spas, salons, gyms and high-end retail stores.

Some of these epoxy coatings don’t contain any metal and are largely mica or synthetic mica particles coated with colors. Others have different aluminum pigments, various metals and liquid colorants. Some are a combination of all of the above. But the traits making these premium coatings so popular are their consistent three-dimensional depth, color and shine that rival the luster achieved with more labor-intensive polishing. The shine comes from the metallic pigments in the coatings that reflect light instead of absorb it.

Today’s easy-to-use reflector metallic epoxy coatings are attractive for many other reasons as well. Overall, epoxy formulas have been greatly improved to flow more efficiently and not to produce nearly as many bubbles as in years past. The coatings, which are clearer and less likely to amber, dry fast without compromising their integrity. They also have an extended pot life.

Installers report a quicker turnaround time with the newer metallic products with less labor involved. For floors in bad shape, reflector designer epoxy coatings can be a less expensive and viable alternative to overlays, polishing and stains.

The decorative thin-film systems generally require a primer before applying the metallic coating and then a topcoat of a clear polyurethane or high-build polyaspartic sealer. Although the products are self-leveling, they can be spread with a notched trowel, roller or squeegee in a random back and forth motion.

Lumiere, Reflector Designer epoxy coatings can produce seamless floors that are chemical resistant, easy to clean and highly durable. In restaurants, these coatings meet the USDA criteria for flooring. They are also environmentally friendly products, with very little to no VOCs.