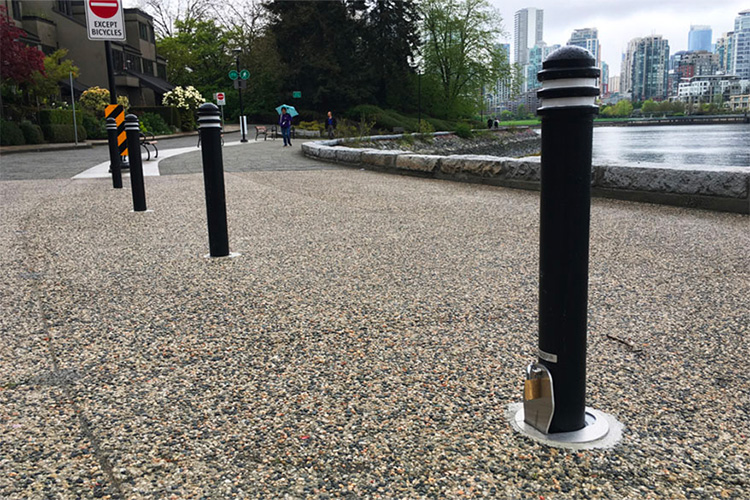 Shallow mount bollards are designed to combat the problematic fitting of traditional bollards which require deep foundations. Excavation and trenching can be expensive and time consuming, and below grade, pipes and utilities may prohibit installation.

All shallow mount bollards are created to be installed at or near the surface, when compared to other bollards of their type or class. Impact protective bollards are typically installed deep into the substrate by three or more feet, with their length providing their crash tolerance. Shallow mount may be installed on a plate or ‘biscuit’ that’s then linked to other bollards. Shallow mounts require just a fraction of the depth you would normally need, with depth requirements ranging from two feet to two inches!

The difficulty and cost of having to excavate several feet beneath the surface brought up the need for shallow mount bollards. In a location where underground utilities prohibit installation or at a location with stories beneath the surface, like an airport, placement over an underground tunnel, car park ramp or bridge deck, a shallow mount bollard may be the only option.

Removable bollards are another class of bollard that often need a below-grade receiver, although one less deep than the crash-rated type. Shallow mounts for this group of bollards are ones that are bolt-down installable and need no excavation at all.

The shallow mounting system is simple to install, and the shallow depth has minimal impact on the installation site.

Shallow mount bollards vary in installation depending on the style or type.

In general, impact-resistant bollards require deep installation and ground disruption. Shallow mounted bollards require much less excavation. They’re engineered to lessen the ingress of dirt and debris. Shallow mounting can be placed in locations where there are many below ground services, such as in city centers.

Surface mount bollards are one type of shallow mount. Either a flanged bollard or a bollard receiver is simply bolted to the concrete (or another surface.) This method is defined by ease of installation. These can be used in almost any setting. Due to the simplicity of their installation, surface-mounted bollards provide minimal disruption to a business and its neighboring surroundings.

Removable bollards are a tremendous solution for temporary, short-term events such as festivals, seasonal fairs, diplomatic visits, or other large-scale conventions and crowd gatherings. Surface mount bollards are excellent for these, as they cause no long-lasting changes to the site.

Traditionally, security bollards require deep installations, especially crash-rated bollards, to be effective and do their job. Surprisingly, shallow mounted installations offer the same level of security as traditional deep mount installations. To displace impact forces, they replace mount depth with mounting breadth, use inter-bollard networking, and/or add weight to create their impact resistance. Therefore, the difference in depth requirements between shallow mounts and traditional deep mounts does not correlate with the level of security each provides. Only the mechanism of impact dispersion changes. Shallow mounted crash-rated bollards go through the same testing as deep-mount bollards to achieve their high-security ASTM rating.

The decreased need for excessive digging and pre-installation preparation for crash-rated shallow mounts makes them a greener solution, compared to typical deep mount installations. The eliminated need for digging a deep foundation makes it simpler to protect natural components such as tree roots from being run-down or damaged. Reduction in noise and pollution is another added benefit with these installations. Less machinery is needed on-site to place the bollards. Deep mount bollards may be cost-effective where depth is not restricted, but they need 25% more concrete for their foundation. Concrete creates 4 to 8 percent of the world’s CO2 emissions, making shallow mount installations a greener solution in material use.

Traditional deep mount bollards are impossible to use in urban areas such as cities, where underground works can immensely limit the space you get to work with. Bridges, too, often require extremely shallow depths to support the bridge’s integrity.

Save time on installation

Depending on the type of bollard you’re installing, shallow versions often take less time than their more deeply set counterparts. For some crash-rated bollards, installation time may be halved. This makes projects easier to handle when work is restricted to specific times and helps prevent hazardous spaces from opening. Bolt-down bollards can be installed very quickly by someone who is comfortable drilling concrete. Time is crucial when it comes to installing security site furnishings like bollards in chaotic city centers. It is vitally important to keep the disruption caused by installation at the very minimum due to its impacts on the client, the city, and the public.

Crash-rated bollards in North America are generally tested by the ASTM F2656 protocol. This standard examines how well barriers of different sorts stand against high-angle vehicle attack. ASTM F2656 uses different classes of test vehicles from compact cars up to heavy-duty trucks. These test vehicles slam into barriers at different speeds, from residential to highway speeds. The standard rates the impact-protection of the barrier. It also establishes a penetration rating. This penetration rating is based on the distance a vehicle at a given speed can move past or vault over a bollard.

The rating of a chosen bollard should be based on the traffic around it. In places where vehicles could not get up to highway speeds—like parking lots where there are many curbs or trees—a lower speed rating for a heavier truck may offer ideal protection. A common shallow-mount bollard is therefore the M30, with a P1 rating. This would protect against a medium-duty truck traveling at 30 mph and will protect against penetration more than 3ft past the bollard after impact—stopping the truck before the flatbed moves past the barrier. This P1 rating was originally designed by the DoD to stop trucks from delivering bombs kept in the back of the truck.

Impact resistance is tested facilities that have standard test vehicles. They choose the correct class and set up speed and velocity, aiming at the most vulnerable part of the bollard, like the diagram pictured above in Figure 1.

The difference between the shallow mount and our typical design is the design of the bollard underneath the grade. While our other crash-rated bollards must be installed very deep into the ground which could limit the available locations and orientations they could be placed, the shallow mount spreads the material out over a larger area, allowing for a shallower area needed for installation. This may be advantageous when there is a small amount of available ground, or important underground infrastructure (electrical, plumbing etc.) that must be left untouched. The crash rating doesn’t change from this, an M30 shallow-mount is the same crash-rating as an M30 non-shallow-mount, but the different installation options allow for more installation options for various site situations.

Before producing a testable model, engineers create in-house simulations using Finite Element Analysis (FEA). Pictured above, you can see some results from a simulation of an M30 impact. A mesh of triangles covers a 3D model. This mesh is made of the “finite elements” that are being simulated by the computer, breaking the overall solid item to be tested into smaller elements to work out the physics on each piece. Entering the force of the impact into the program allows it to simulate the effect a crash would have on each finite element within the mesh. The results are calculated at some points (typically at the boundaries of the model) and interpolated at other elements. The first image in Figure 2 shows the displacement of the bollard from an approximate impact. Red areas represent the most displaced. The second image in Figure 3 shows the safety factor at each element. While the program can’t measure the penetration of a crash test doing this, an engineer can get an idea of the strength of a design, and identify areas where more work is needed before manufacturing and testing a tangible product.