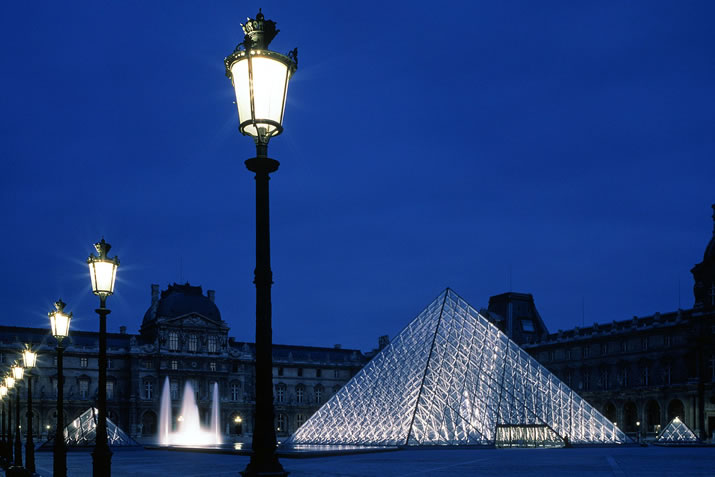 The Grand Louvre – Phase I - in Paris has been selected for the 2017 AIA Twenty-five Year Award. Designed by I.M. Pei, FAIA, and his firm Pei Cobb Freed & Partners, the 71-foot-high glass and stainless steel pyramid now rivals the Eiffel Tower as one of France’s most recognizable architectural icons. Recognizing architectural design of enduring significance, the Twenty-five Year Award is conferred on a building project that has stood the test of time by embodying architectural excellence for 25 to 35 years. Projects must demonstrate excellence in function, in the distinguished execution of its original program, and in the creative aspects of its statement by today’s standards.  The project will be honored in April at the AIA National Convention in Orlando.

Greeted with hostility and derided as a Modernist affront when it was first proposed as the main entrance to Paris’ Musée du Louvre, the project was born of President François Mitterrand’s quest to modernize the Louvre in the early 1980s. Pei’s pyramid thrust the 800-year-old Palais complex into the modern era while simultaneously making the museum more accessible to larger crowds.

When he was selected as the architect, Pei faced a seemingly insurmountable challenge: reorganizing and expanding the museum without compromising the historic integrity of one of France’s cherished monuments. To execute the project, Pei wove together an unprecedented amount of cultural sensitivity, political acumen, innovation, and preservation skill. As one juror noted, the project has become “an internationally renowned symbol for Paris and an example of the prowess and legacy of I.M. Pei.”

The entirety of the project, known as the Grand Louvre, was executed in two phases over the course of a decade. For the first phase, which gave rise to the pyramid, Pei reorganized the museum around the central courtyard, the Cour Napoléon, transforming it from a parking lot to one of the world’s great public spaces. Twenty-seven years since the project was completed, Pei’s success has been reaffirmed in the museum’s visitorship, which has more than tripled since the expansion. To accommodate the influx, the museum undertook its first renovation of the reception area directly beneath the pyramid recently and took distinct measures to maintain the integrity of Pei’s design.

Despite the rancor that surrounded the design’s unveiling, Pei gave France an unexpected treasure that its citizens and visitors from around the globe value as much as the priceless works of art contained within the Louvre. Bringing “life, action, and beauty to what was already beautiful,” as one juror noted, the project fused modernity with a swell in national pride for a historic building.