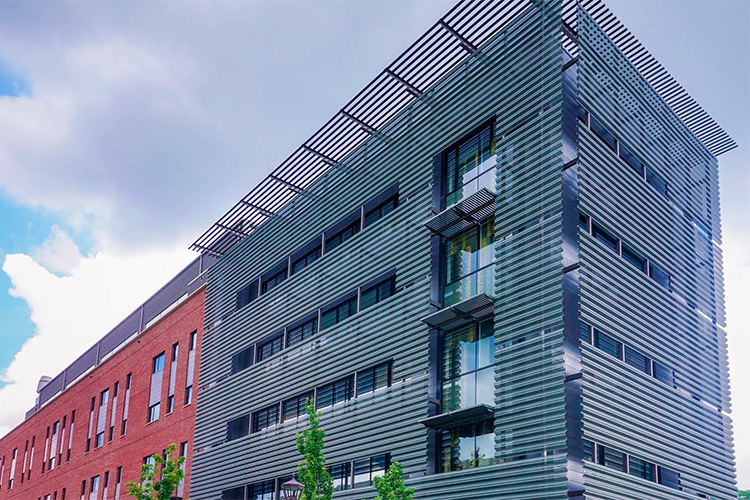 The Roger A. and Helen B. Krone Engineered Biosystems Building (EBB Krone) opened in 2015. It was built with the intention of creating a space where Georgia Tech engineers and scientists can work together on new medical technologies and curing diseases. Much like bees - or Yellow Jackets - the mascot of Georgia Tech, work together in a hive.

It is possible that design architect, Lake Flato, and local architect Cooper Carry considered this when creating the building design. The EBB is a brick building with glass windows shaded by a perforated metal sunscreen surrounded by trees, walking paths, and a garden. The sunscreen, with perforated zinc panels, has a honeycomb effect close up. From a distance, the 5- story building appears to be a giant beehive of Georgia Tech Yellow Jackets busily working together to make sweet scientific discoveries.

The building is LEED Certified and has won multiple awards. (Shown below). The customer was Peachtree Protective Covers and the project manager was John DuConge from Mccarthy Building Companies Inc. Morin Corporation provided the metal panels for the sunscreen.

The sunscreen is a passive sun shading system made of perforated zinc panels. Zinc is a natural metal, it is recyclable, and has a lifespan longer than most metals at 80+ years. The zinc panels are 1.2 mm and coated with a Graphite Gray color coat. They are roll formed in Morin’s O-12 panel profile.

A sample of the O-12 panels with two different perforation patterns visible.

Up close, the panels have a unique feature, indiscernible from a distance. Each panel has two different perforation patterns. The O-12 panels were installed horizontally. The nature of this panel shape makes it have an edge that is parallel to the building walls and windows (the face), and a sloped edge that faces either to the sky or the ground. On the panel face, the perforation pattern is ⅛” holes with 7/32” spacing, leaving a 30% open area. The other edge has ⅛” holes with ⅜” spacing, leaving only a 10% open area. This design was achieved by strip perforating each panel. By doing it this way, the bends of the panel remain solid so that there is no distortion. Sample panels were made to make sure that the perforation holes would line up on the lapping panels. Originally, there was going to be three different perforation patterns, but two was enough to satisfy the function of having varying perforation patterns per panel. Said function of this design is to effectively shade the building from Atlanta’s harsh summer sun while allowing visibility from inside the building and eliminating glare off the glass windows. The façade has some spaces between the panels, breaking up the screenwall and creating some interesting horizontal lines.

In addition to the screenwall, the project also had four other Morin panel profiles on various parts of the building including solid panels on the top floor covering the penthouse, soffit areas, and wall areas. The other profiles used were VB-34, F-16, F-24, and O-24.