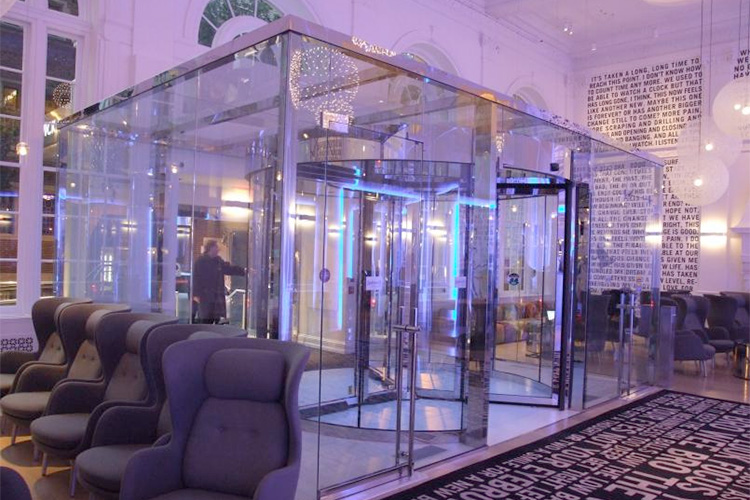 Boon Edam Inc., a global leader in security entrances and architectural revolving doors, today announced that the Warwick Hotel Rittenhouse Square in Philadelphia, PA, is quite satisfied with the functioning and cost savings of their Boon Edam Tournex revolving door. The Tournex is an example of a classic automatic revolving door and is designed to handle high capacity applications.

The historic building housing the Warwick Hotel Rittenhouse Square originally had a manual revolving door flush with the building’s facade. Somewhere along the way, it was decided to remove the relatively smaller gauge revolving door and replace the entrance with a double set of sliding doors.

“Our HVAC system was designed for a revolving door entrance,” said Ray Hewitt, the hotel’s Director of Engineering, “we wanted to put a revolving door back in to address the negative pressure we were experiencing in the lobby.” That negative pressure was pulling in cold air during the winter months, and cooled, conditioned air was escaping out the double doors in the summer.

During a complete lobby renovation project a few years back, designers worked to return to a revolving door lobby entrance. Because the Warwick is in a historic building, they could not change the facade of the building, so they pushed the entire entrance into the lobby itself. The architects and the designer chose a 12’ diameter Boon Edam Tournex automatic revolving door, with three door wings and a highly polished (mirror) stainless steel finish. The Boon Edam door is enclosed in a stylish glass cube, accented with purple neon lighting.

The Warwick has 301 hotel rooms and 106 permanent residents. On any given day, between guests, residents, staff, and visitors, up to 1000 people are passing through the entrance. Since the installation of the new entrance, the effect has been night and day—guest and visitors utilize the lobby space longer and in greater numbers. A big community table is usually filled all day long and the lobby is accented with attractive fireplaces. The hotel lobby also offers two full service food and beverage outlets (Bluestone Lane & Prime Rib Steakhouse), with a third to be announced sometime this year.

In addition to a now grand sense of arrival and more useable, comfortable space, the new entrance is also paying dividends on energy savings. “With the old entrance, our HVAC was running constantly, it could not keep up. Now, the unit can shut down periodically; that’s good for the health of the system, and we’re seeing substantial savings on energy bills,” said Hewitt.

The Boon Edam revolving door has an important feature for installations like a hotel or large office building—in the event of an emergency, the doors stop and the wings can be “book folded” to create wide open ingress and egress. The hotel has a maintenance contract with Advanced Door, but since installation the Boon Edam revolving door has been virtually trouble free.