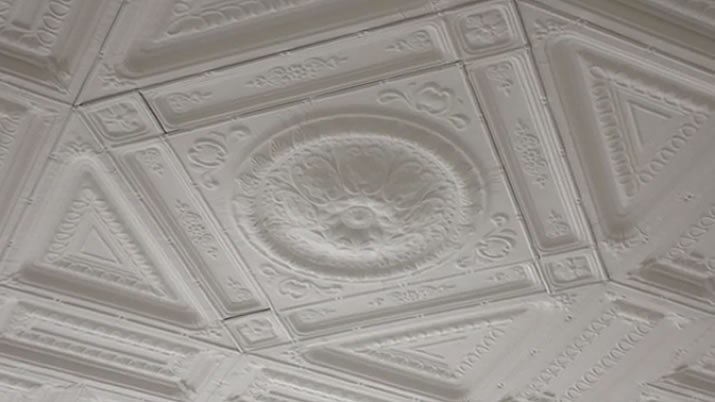 This year’s Ceiling Project Award goes to Ricasoli&Santin Contracting for their contribution to the Duffy School-Senior Housing Project in Florence. The idea is pretty interesting: take an existing public school building constructed in the early 1900’s and convert it into a modern senior living facility while maintaining its historic character.

During the planning stage, it was discovered the acoustical tile drop ceiling found throughout the building hid classic, formed tin ceilings. The town’s historical society saw not only the beauty of these ceilings but also their historical significance and incorporated their repair and replacement into the building plan.

Bob: Ricasoli&Santin was hired to do the tin ceilings in the hallway and the bedroom, and living room areas at the living units. We were required to help come up with the patterning that matched the original historic ceilings in each of the areas.

Over the course of four months, Ricasoli&Santin’s crew worked to install large expanses of tin ceiling, running the length of the long hallways on two floors of the building. These incorporated not only ceiling tiles, but complex tin moldings as well. Making matters even more difficult was the fact that many of the components came from different manufacturers, as opposed to being part of an integrated single system.
During this time, the crew also worked installing additional elaborate tin ceilings in former classrooms that would become individual apartments. Six of these had medallion ceilings where the medallion alone was made up of sixteen separate tin pieces that had to fit together exactly. Even alcoves, originally used as coat rooms received tin ceilings and moldings. The variety of ceiling patterns and the building structure make each residence at the Duffy School Senior Housing facility unique. The vertical relief of the tin ceilings is enhanced by the tall windows, typical of school buildings at the time. It’s a rather dramatic effect.

Bob: I’m really proud of the work that Ricasoli&Santin did on this project, duplicating the historic value and atmosphere of the original building when it was built in the early-1900’s.